We just learned how one’s stones can be surrounded and ‘killed’. Forgive the somewhat agressive language but in times go can become an aggressive game. The most inportant rule to remember is that every stone or groups of stones which are in ATARI (who have only one liberty left) can get killed in one move by the other player.

The reason why you need to know this is the following: 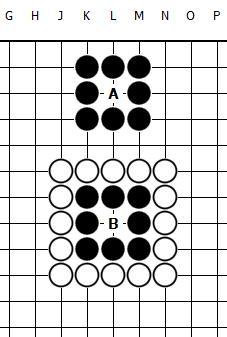 In the first case of A, we have a group of black stones which are not in immediate danger of being caught. A white move at A is not even allowed that’s how crazy it is. This is because if white would put a stone there then his stone would be on the board with no liberties… which means it would be dead straight away. This point in a formation where the other player is not allowed to play is called an EYE.

If white, however, managed to take away all the outside liberties of black like in situation B, then black is in ATARI (one liberty) and white is allowed to play in the eye. The black stones will then get taken off the board and the white stone will end up with enough liberties to live.

What we learn from figure 1 is that one EYE  is not enough to live, every group needs at least 2 EYEs to live. Here are some basic examples of living groups:

In figure 2 we have three living white groups and each show an example of living shapes. They each have two eyes. Black cannot play in any of the marked points because non of the groups are in ATARI. And in case you are wondering, here is a tip. Never, in any condition play in one of your two eyes when you only have two. Or else your heading for certain death.
Life and death problems will be following soon
for now you can evolve to the ko rule.
Good luck

One comment on “Learning to play Go: Life and death”