Now that you’ve learn about territories maybe it’s time for u to learn about a shaping caracteristic of the game…. Liberties.

Every stone on the go board has to have liberties. here you can see:

Here you can see that the amount of liberties change depending on the board placement. Stone A is not on the edge nor in the corner. Every cross around stone a represents a liberty. If we count A‘s liberties we can count to four. When we look at B who is placed on the edge of the board we notice he only has three liberties. C has only got two. These differences are inportant to know, because once a stone runs out of liberties then it gets taken of the board. The stone will count as one point for the opponent at the end of the game.

So how will white take liberties away from black (or the other way around)? Well simply by playing on the liberties of black:

Let us first look at A. White has played on one of black’s liberties so black only has three left. Black B only has 2 liberties. When white has taken three liberties from black then black has only one liberty left and is at risk of being surrounded on white’s next turn. This situation, where one has only one liberty left is called ATARI. the stone D has been removed because it did not have enough liberties.

there is a way for white to save his stone from being surrounded. Instead of letting white play on one of its liberties, if black plays there himself then his two stones will share liberties: 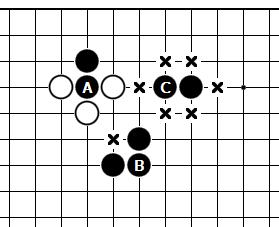 Group B is a situation in which lot’s of people get confused. Group B has a total of seven liberties. The point X only counts as one liberty.

To test your understanding here are 5 problems: count the liberties of the different black groups:

If you counted wrong use this next diagram as a reference to help you:

Okay ^^ Next step is learning the rules of life and death. You’re getting there.